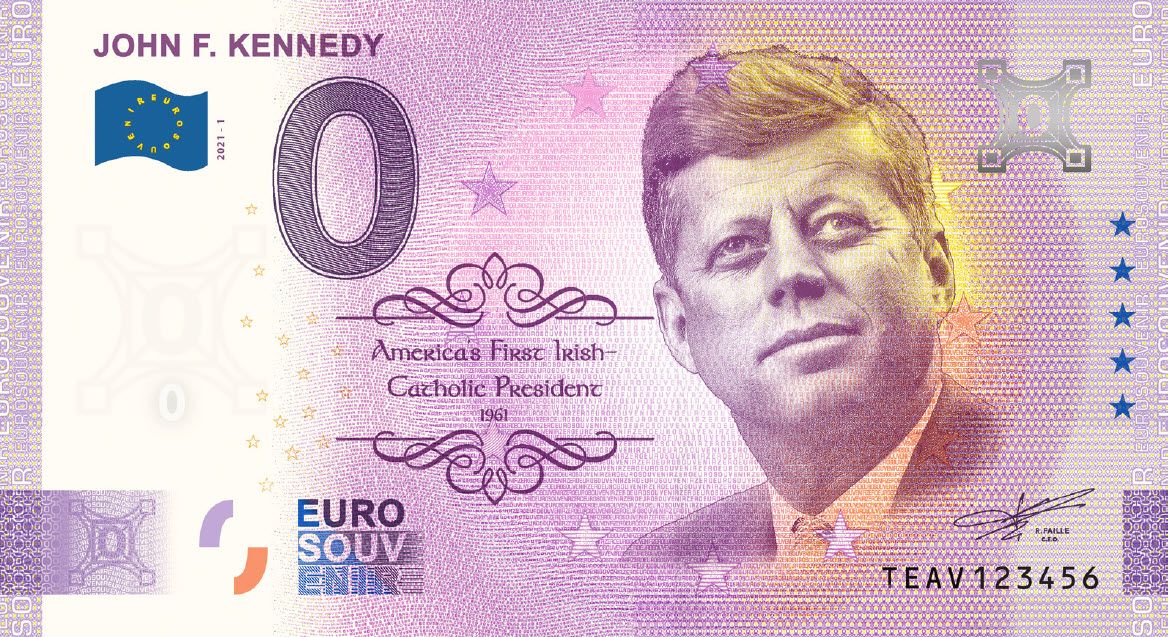 10,000 limited-edition "0 Euros" printed to commemorate 60th Anniversary of JFK's inauguration
HEADFORD, Ireland - nvtip -- 60 years ago, John Fitzgerald Kennedy did what many said couldn't be done: be sworn in as President of the United States by placing his hand on an Irish-Catholic Bible.

Kennedy's Irish roots make him a beloved figure in the country of his heritage, which is why to commemorate the 60th anniversary of that seminal moment in U.S. (and Irish) history, Euro Note Souvenir has printed 10-thousand limited edition  JFK Zero Euro Notes. The notes will be printed in the same facility in France that prints the Euro, and Euro Note Souvenir is the exclusive license-holder to print commemorative notes such as these in Ireland. The note features Kennedy at his most presidential, with the words "America's First Irish-Catholic President" emblazoned beside him.

More on nvtip.com
"President Kennedy won the hearts of Ireland when he won the presidency, and again in 1963 when he made his presidential visit to Ireland," says Euro Note Souvenir Founder Peter Schneider. "As students of history, we want to make sure that those who we honor with these special commemorative notes embody the strength and the courage of Ireland, and what better 'profile in courage' could we pick than JFK?"

The notes will be available for sale in both Ireland and the United States. To purchase one of the notes, collectors can go to www.euronotesouvenir.com while supplies last. Schneider says that those who want to purchase this limited-edition note may want to hurry, as he is expecting considerable demand for the presidential currency.

"While JFK is no stranger to being on currency, the vast majority of it is U.S.-based," says Schneider. "It's a rarity to have a U.S. president on the Euro, and as such, we think these will go fast. That's why we doubled our typical limited-edition run and did 10,000 notes, rather than 5,000. JFK's global popularity demands it."

More on nvtip.com
Peter Schneider is available for interviews about the new Euro Note, and about the growing popularity of Zero Euro Notes as souvenirs. To schedule an interview, contact Euro Note Souvenir at info@euronotesouvenir.ie.

Euro Note Souvenir is the exclusive license-holder for zero Euro banknotes in Ireland. These popular souvenir notes have the look and feel of real money, and are printed in the same facility in France that produces real Euro banknotes. More information is available at www.euronotesouvenir.ie.